Mark Schultz on Prince Valiant as an American Invention

Following, with added images and links, is an excerpt from the introduction to Prince Valiant: Far from Camelot by Gary Gianni and Mark Schultz, the current illustrator and writer, respectively, of the Prince Valiant adventure strip. This introduction is written by Schultz (pictured at right). 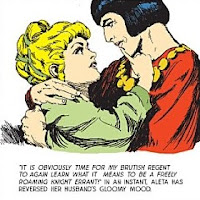 As I was about to begin to write my first Prince Valiant strip, King Features Syndicate editor-in-chief Jay Kennedy gave me a bit of advice, which I will attempt to adequately recall: “Although Valiant is an epic adventure, with lots of opportunity for pageantry and action, remember that it’s Val’s relationship with his wife and family that keeps the strip accessible and popular.”

That advice has proven itself for me and artist Gary Gianni. The emotions that follow from the personal lives of those associated with the epic give it a human scale. Valiant works best when the pull of family equals the pull of adventure. 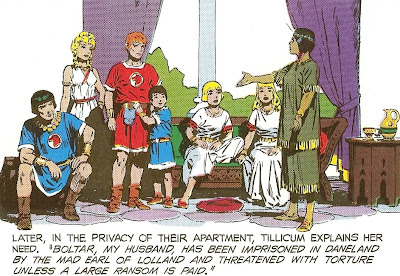 Prince Valiant is, of course, an American invention. Although it is cloaked and housed in a wonderfully detailed fantasy of seventh-century Europe, in heart its themes and values are totally of the New World. Although populated with characters drawn lightly from Arthurian legend, it has little to do with the European literary traditions upheld by Arthurian chroniclers Malory, Tennyson, and White, Its sensibilities come straight from the American middle class.

The lead characters may be of royal blood, but the strip has never treated them as if their birthright allows them any entitlement or inherent superiority. Breaking with the traditions of the European fairy tale and nationalistic legend, the characters in Prince Valiant, whether king or cordwainer, rise and fall on merit and personal initiative. No one gets a free ride by fact of birth, or by divine fiat. 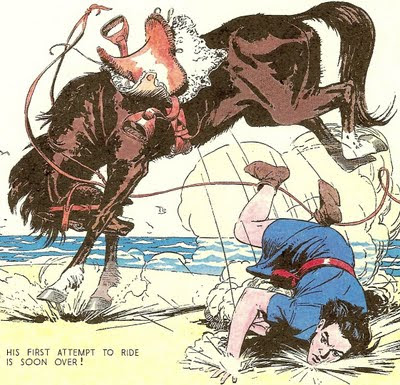 Val is much more closely related to the iconic American characters created by Horatio Alger: his success is based on hard work and pluck. His royal Thule blood means nothing when, at the start of the saga, he and his deposed family are stranded in the inhospitable fens of eastern England. It is his strength, skill, intelligence, and, most of all, extreme cleverness that raise him to knighthood in Camelot. His abilities and aptitude lead him to travel much of the known world (as well as the unknown continents to the west), to battle Huns, Saxons, and Byzantines, or to win the Queen of the Misty Isles for his fair bride – all while having sense of inherent privilege consistently deflated. 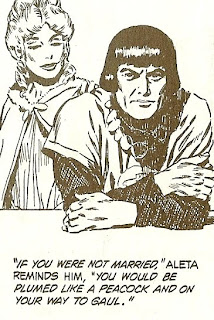 Most importantly, Val must constantly win his irreverent family’s respect by word and deed. Which brings us back to Editor-in-Chief Kennedy’s words of advice.

Val may be a mighty warrior, but he is also one of us. His wife and children keep him in his place, alongside those of us who don’t star in our own comic strip. Sometimes Val just doesn’t get any respect and he’s that much better for it.

Gary and I know a good thing when we see it and have done our best to maintain Val’s status as that hardworking, sometimes put-upon, sometimes self-indulgent, Regular Joe who just happens to be a prince and the very best at what he does. 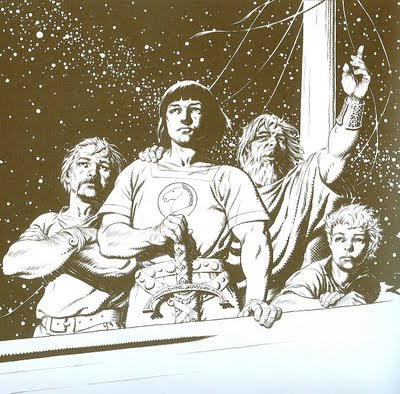 Above: When artist Gary Gianni's mother passed away late in 2008,
Mark Schultz gave his partner some time off by filling in with installment #3756
(February 1, 2009), from which this illustration is taken.