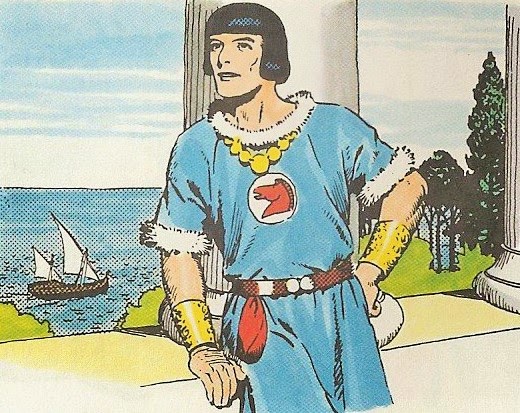 On this day 74 years ago, the first installment of Prince Valiant: In the Days of King Arthur was published in newspapers throughout the United States. It seems fitting, then, to launch today this weblog dedicated to honoring and celebrating the remarkable achievement that is Prince Valiant.

Created by Hal Foster in 1937, Prince Valiant is an epic adventure – one that continues as an ongoing story in over 3800 Sunday strips. In fact, this Sunday's strip or installment is number 3862! According to King Features Syndicate, Prince Valiant currently appears weekly in more than 300 American newspapers. It's also published internationally.

Above: Today's installment of Prince Valiant – #3862.
(To enlarge, click on image)

Generally regarded by comics historians as one of the most impressive visual creations ever syndicated, Prince Valiant is noted for its realistically rendered panoramas and intelligent, sometimes humorous, narrative. Instead of word balloons, Prince Valiant is narrated via captions positioned at the bottom or sides of panels. Frank Plowright in The Comic Guide (1997) notes that: "In the strictest sense, Prince Valiant isn't a comic, being illustrations accompanied by blocks of text, but it's nevertheless stylish, influential, and an exceptional body of work." In his introduction to the first edition (1992) of The Definitive Prince Valiant Companion, Todd H. Goldberg suggests that Prince Valiant be considered "a massive illustrated novel presented in a comic art-like style." 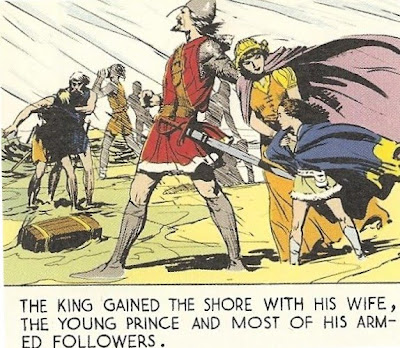 Above: The young Prince Valiant makes his first appearance
with his parents, King Aguar of Thule and his queen – February 13, 1937.
The strip begins with the exiled Aguar seeking refuge
with his household in the wild English Fens. 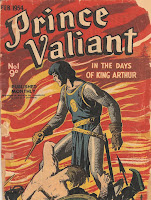 I first became aware of Prince Valiant when, as a child growing up in Australia, I discovered in my family's garden shed old copies of Prince Valiant comic books that my father had collected as a youth in the 1950s. These comic books, I was to learn later, were collections of various Sunday strips from the late 1930s and early 1940s. They were reproduced in black and white – as were the more recent strips that were then published every Sunday in the Sun Herald newspaper, and which I read and collected as a teenager. It wasn't until many years later that I discovered that Prince Valiant was originally designed to be published in color – which indeed it was (and is) in many places. 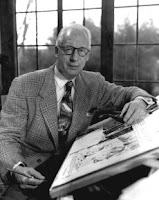 A Prince Named Valiant will celebrate the work of these gifted artists and writers by sharing images and text from Prince Valiant's 70+ year history. I'll also periodically share my own and others' writings and insights on what has been called the "biggest, most beautiful comic strip of all time." 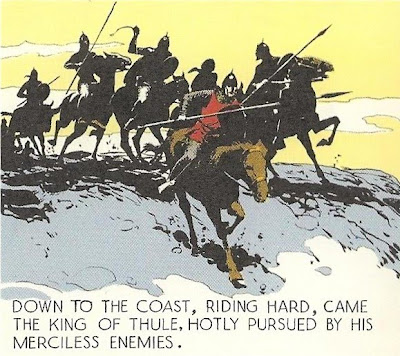 Above: The opening panel of the very first installment of Prince Valiant
(Saturday, February 13, 1937).

NEXT: “He Wasn't a Superhero But He Was a Hero”

Opening image: The illustration from the opening panel of the January 15, 1961 Prince Valiant strip (Hal Foster).