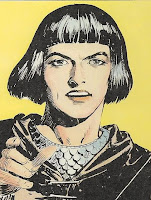 Did you know that the first article I ever had published had nothing to do with theology or politics or gay rights? Rather, it was about the adventures of a fictitious Viking prince in the days of King Arthur!

I remember I bought a nice jumper (that’s a sweater for my American friends) with the $40 I was paid for this article – one that was published in The Canberra Times in April 1987. It was also an article that I submitted to the professional writing class I was taking at that time at the Canberra College of Advanced Education (now the University of Canberra). My instructor awarded me a “credit” grade, and noted that my article was “topical, interesting, and well-researched . . . [with] a genuine enthusiasm evident throughout.” He also observed that I “occasionally lapse into over-long sentences” – a habit that dogs me to this day! 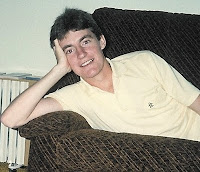 In a future post I’ll share how I first became interested in the subject of this first ever article of mine. But for now I simply share (with added links and images) what I wrote back in the Australian autumn of 1987, when I was just a beardless youth of 21.

An old witch once prophesied that a certain young and adventurous prince would never know contentment in his life. Whether or not the witch’s prophecy has been fulfilled is hard to ascertain, as contentment, like wealth, is one of those difficult concepts to measure.

Yet to the thousands of faithful readers, the writer and artist who labours to bring the prince to an exquisite degree of life, and the syndicate which has the right to publish this life in over 300 newspapers worldwide, I dare say the prince in question is a source of great contentment indeed. 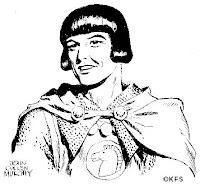 He is, of course, Prince Valiant – knight of the Round Table and heir to the throne of Thule, who this year celebrates fifty years of existence. Valiant, of course, is not fifty years of age. It has just taken that length of time for the two writer/artists who have been involved in his creation to chronicle his life so far.

Prince Valiant, the comic strip, was created by Hal Foster in 1937. Foster, an accomplished commercial artist, was not new to the world of comics. He had previously written and illustrated Tarzan and the Apes. Yet it would be Prince Valiant, with its rich illustrations and detailed attention to the King Arthur legend, which would bring Foster international renown. 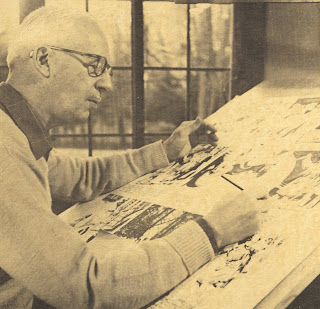 “God in his wisdom endowed me with certain imperfections,” Foster once declared, “but I have made Prince Valiant as I wish God had made me. He’s sort of my body with muscles.” 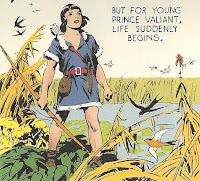 Prince Valiant was introduced to the Sunday comic pages as a five-year-old boy, the son of the Viking king, Aguar, and his Roman-born wife. Fleeing the sword of a usurper, Aguar and his household settle into exile in the Fens district of Britain. It is here that the young prince’s mother dies and the witch, Horrit, makes her grim prophecy.

In a matter of weeks, the strip depicts Valiant’s aging to his late teens, thus beginning to chronicle the lad’s many adventures.

“The most fun was establishing the legend of Prince Valiant in the early strips,” said Foster. “The hardest thing . . . has been to keep Val human. He has to be good and virtuous but I try to keep him human also. He has faults and frailties like everyone else.”

Leaving his father’s household, the youthful Prince Valiant attaches himself to the court of King Arthur. Roaming across Britain, Europe, and the Holy Land, often as squire to the noble Sir Gawain, Valiant bravely, though sometimes recklessly, fights for the oppressed and for his own renown against invading Huns, Goths, and Saxons. During one adventure he is presented by Prince Arn of Ord with the Singing Sword. “Invisible is he who uses it in good cause,” Arn tells Valiant, who quickly validates the claim. 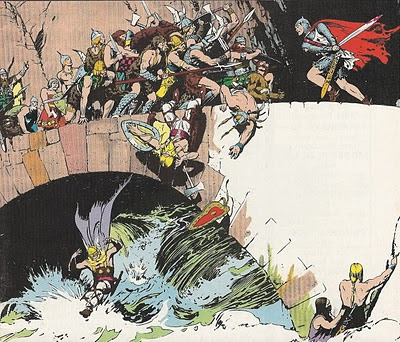 In time he is rewarded and becomes a knight of Arthur’s legendary Round Table.

“The medieval period gave me scope, that’s why I picked it,” Foster once said. “I have a leeway of almost three centuries [as] with the decline of Roman civilization in the fifth century, written records ceased being kept.”

It was inevitable that Prince Valiant should meet his match, yet it was not in the guise of a warrior or sorcerer but a petite, golden-haired maiden – the young queen of an Aegean kingdom. Aleta, Queen of the Misty Isles, had been falsely accused of witchcraft and murder. Prince Valiant, having dragged her from her throne, vows to take her as his captive back to Camelot and to justice.

“Who had enslaved whom?”, Prince Valiant would ask himself years later, for it soon became apparent that the two were hopelessly in love. And so after an epic adventure involving Valiant rescuing Aleta from a fiendish tyrant, the two young lovers were married. 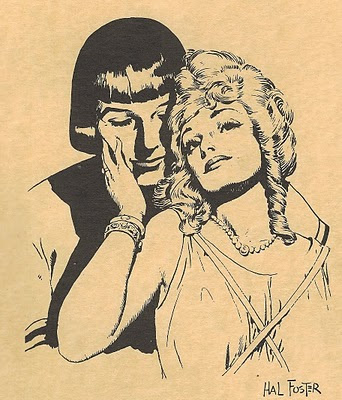 Foster once stated that he originally wanted to do a strip which would permit him to do fantasy. “I wanted to show magicians, ogres, dragons, and knights. However, after Prince Valiant began, the characters in the strip became too real to do much fantasy.” 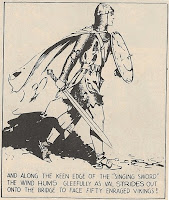 Yet what the strip may lack in fantasy, it more than makes up for in adventure. In the decades following his marriage, Valiant embarks on some of the greatest quests of his career. His young bride by no means disappears into the background. On one occasion, Aleta is abducted by Ulfran, the famed Viking raider. In pursuit, Prince Valiant is led to the shores of the New World where he defeats Ulfran and is reunited with his wife. The winter is spent in America with Valiant’s Viking crew and friendly Indians. It is here that Arn, Valiant and Aleta’s first child, is born.

Prince Arn, named after Valiant’s adolescent friend, was the first of five children. Twin daughters, Karen and Valeta, came next; then Galan, heir to his mother’s throne; and finally Nathan. This youngest child almost never knew his family, having been abducted moments after his birth by agents of the Byzantine Emperor Justinian. Prince Arn eventually rescues his infant brother and restores him to his rightful family. 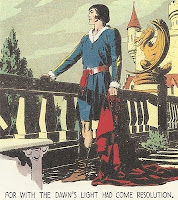 Although much of Prince Valiant’s appeal lies in its skillfully written and illustrated adventures, there is something else equally responsible for the strip’s classic status. For as well as the brute strength of his opponents, the scheming evil of despots and sorcerers, and the treachery of the strip’s arch-villain, Mordred, Prince Valiant, the man, also confronts a variety of situations that call him to draw upon his strength of character and a moral code that, more often than not, challenges him to put others first. He is not a pillaging Viking thug but a gallant, if at times proud, nobleman intent on establishing peace and justice. Not an easy task in the brutal epoch of the Dark Ages.

Even before Hal Foster’s death in 1982, Prince Valiant was being illustrated by John Cullen Murphy [left], the two artists having first began collaborating in 1970. The text of the stories, written by Murphy’s son, may be more detailed but the fundamental qualities remain, and thus the strip’s popularity.

Combining elements of adventure, romance, and Arthurian lore, Prince Valiant has enthralled readers for half a century – a feat with which Valiant himself would be quite content. 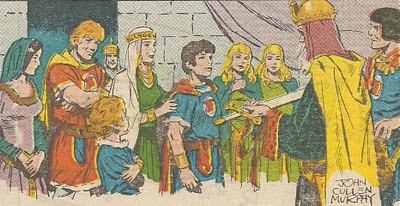 Above: This panel from a 1989 strip is a rare depiction of Prince Valiant
and his entire family. In it, Valiant and Aleta's son Galan is being presented
by King Arthur with Uther Pendragon's sword for his "exemplary service in Cathay."
Pictured from left: Prince Valiant's eldest son Arn and his wife Maeve,
youngest son Nathan (foreground), Aleta, Galan, twin daughters Karen and Valeta,
King Arthur, and Prince Valiant. 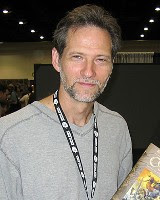 Of course, Prince Valiant continues to this day! – as, since 2004, the strip has been illustrated by Gary Gianni (right) and written by Mark Schultz.

For an excellent overview of the history of Prince Valiant, I highly recommend The Definitive Prince Valiant Companion by Brian M. Kane.

The Prince Valiant Page by Gary Gianni is also an informative and entertaining resource – one that looks at the artistic style and method of Gianni, the third and latest artist to illustrate Prince Valiant.

Finally, for the latest installment of Prince Valiant, click here.

Above: "A dragon! A dragon awaits Prince Valiant!"
Val and his youngest son Nathan are given a mysterious warning
by "three weird sisters" in a 2005 story by Gianni and Schultz.
Posted by Michael J. Bayly at 10:08 AM