An "Unpleasant Duel," A Memorable Scene

Prince Valiant's "unpleasant duel" by firelight with a mysterious and ferocious "lady bandit" is an impressive display of artist Thomas Yeates' ability to render light and shadow, and thus create a truly memorable scene. 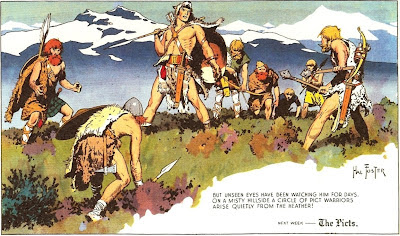 Disguised as a pict, Prince Valiant ventures into the rugged Scottish hills in search of a rumored Viking invasion force. . . . "But unseen eyes have been watching him for days [and] on a misty hillside a circle of pict warriors arise quietly from the heather!"

Earlier this year Prince Valiant celebrated its 75th anniversary with a truly memorable installment, or episode, by Gary Gianni and Mark Schultz. It wasn’t the first time, however, that the strip has acknowledged and celebrated a milestone in its own history.

Back in 1994 the creators of Prince Valiant (at that time the father and son team of illustrator John Cullen Murphy and writer Cullen Murphy) produced a celebratory 3000th installment. In the week before it went to print, the following article by William Grimes was published in many of the newspapers that carried Prince Valiant, including the St. Paul Pioneer Press (from which I cut it out and saved it!) Grimes’ article is reprinted this evening at A Prince Named Valiant with added images and links. Enjoy! 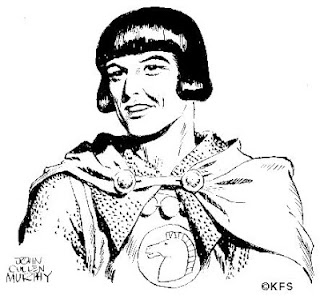 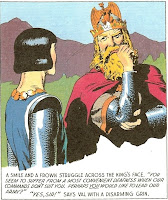 King Arthur knew Prince Valiant was a knight beyond reproach. But could he have predicted the warrior with the silly-looking haircut would last 3,000 episodes?

Sunday [8/7/94] Val will unsheath the Singing Sword, flex his muscles and fight the good fight, as he has every Sunday since February 13, 1937, when his creator, Harold Foster, gambled that Americans would want to follow the adventures of a young knight in the Dark Ages. He was right.

Today the strip appears in 350 newspapers in 18 countries, reaching an audience that its syndicator, King Features, estimates at 44 million.

Over the decades, as Prince Valiant waged mortal combat with the likes of Mordred, Attila the Hun and his current foe, Alaric, the competition has withered away. Action-adventure strips such as Flash Gordon, Buck Rogers and Terry and the Pirates have all disappeared from the funny papers. But Val survives. Still married to Aleta of the Misty Isles, he’s well into middle-age now, with five children and an infant grandchild. The haircut has not changed. Neither has his restless nature.

The franchise is now in its second generation. In 1970, Foster turned over the illustrating of the strip to John Cullen Murphy, whose son, Cullen, the managing editor of The Atlantic Monthly, has written the stories since 1979. Meg Nash, John Cullen Murphy’s daughter, does the coloring and lettering. (Foster, who continued to contribute story ideas during the ’70s, died in 1982.)

“We stand out because of meticulous drawing, artful lettering and interesting storing,” said John Cullen Murphy. “Hal used to say that drawing can sell a strip right off the bat, but to keep it going you have to have good writing.” 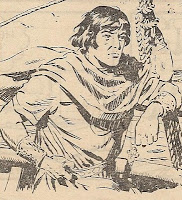 The stock in trade of Prince Valiant is the heroic quest, with its hero setting off for foreign parts, sometimes at the request of King Arthur, sometimes in response to evil designs of colorful archfiends. (At the moment, Val must find the lost shield of Achilles to free his wife and his son Nathan, who are being held hostage in the Alps by Alaric). But often the plots lines can be humorous or homey. One of John Cullen Murphy’s favorites, for example, is Aleta’s attempt to introduce the fork into Britain.

“Hal gave the story line a great deal of latitude, which is a factor in its longevity,” said Cullen Murphy. It has humor, there are family episodes, and he allowed it to veer at times toward fantasy.” He admits a particular fondness for writing mini-adventures that send Val’s ship into a magic fog enshrouding an island ruled by one of the seven deadly sins or one of the four cardinal virtues. 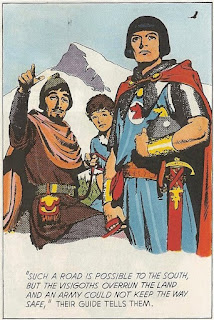 The entire world is available to Prince Valiant, and he has made the most of it, smiting Huns, Saxons and Saharan nomads. The call of adventure has taken him as far as India and China, where he encountered the legendary Prester John. “he’s been on four continents, including North America,” Cullen Murphy said. “He has seen Niagara Falls.”

There’s even room to address burning issues of the day indirectly. “In one episode, Arthur talks about the need for medieval Britain to maintain its bridges and roads,” Cullen Murphy said. “We never used the term ‘crumbling infrastructure,’ but we touched on the idea.”

Hal Foster created Prince Valiant after giving up Tarzan, which he had illustrated off and on in the ’20s and ’30s. The new strip, which originally had the working title Derek, Son of Thule, told the tale of a king and his son who, driven from the Scandinavian kingdom of Thule by the usurper Sligon, fled to the fens of Britain.

The son, renamed Prince Valiant by the president of King Features, became a squire of Sir Gawain, and after proving his bravery, was accepted as a knight of the Round Table. Showing admirable tact, Arthur has never brought up Prince Valiant, the 1954 film starring Robert Wagner.

John Cullen Murphy [left] took over Prince Valiant at episode 1,760, after passing a try-out with Foster in 1970. A protégé of Norman Rockwell, Murphy was a magazine cover artist and the illustrator for Big Ben Bolt, a boxing comic strip that ran from 1950 to 1974.

“When I first started doing it,” he said, “I tried very hard to make it look exactly like Foster’s work. With time, though, I’ve made it a little more modern, a little looser.” At the same time, the format has shrunk from days of yore, when the strip commanded a full-size newspaper page.

In episode 3,000 Sunday, Murphy flashes back to four of Val’s greatest trials, rousing action scenes that involve four memorable villains: wicked Baron Baldon, Einar the Red (torture-master to the Viking king Valgrind), Attila the Hun and Prester John, who attacks Val with a mechanical dragon. As always, virtue and the Singing Sword triumph.

A week later, it will be back to business as usual. As Horrit the Witch once told Prince Valiant: “You will have high adventure, but nowhere do I see happiness and contentment.” 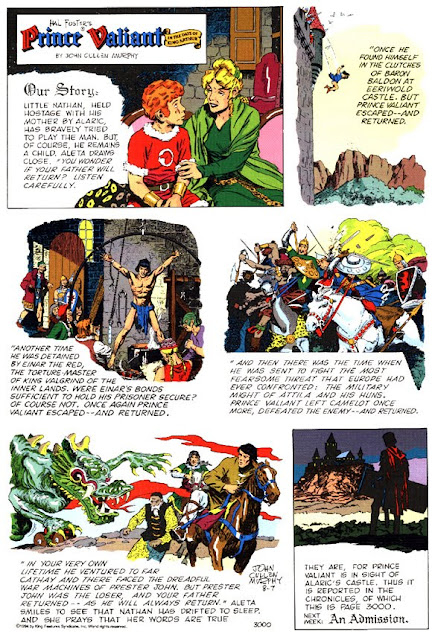 
See also the previous posts:
• John Cullen Murphy on Prince Valiant: "It's My Duty. I'm Responsible For It"
• Mark Schultz on Prince Valiant as an American Invention
• A Flash of a Cameo
Posted by Michael J. Bayly at 9:53 PM 1 comment:

To ease the growing friction between her husband and the mysterious blond stranger whom she has named St. George, Aleta skillfully appeals to and satisfies the egos of both men. 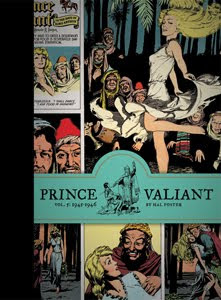 Following is how Fantagraphics describes the latest volume in its Prince Valiant series.


__________________
Fully half of this latest volume of Hal Foster's epic masterpiece – again scanned from superb syndicate proofs – is devoted to the remaining chapters of "The Winning of Aleta," a 20-month(!) epic in which Valiant obsessively pursues his bride to be. Not surprisingly this is followed by a sequence called "Matrimony," which ends with a newly wed queen adjusting to the luxurious, exciting court life at Camelot.

But Val's marriage does not signal an end to his adventures, quite the contrary. In "War in the Forest" Val is sent out to spy on encroaching Saxons – unknowingly aided by Aleta, who, disguised as a small knight (and dubbed "Sir Puny") helps prevent disaster. But the 1946 strips end with Val and Aleta unable to return to Camelot and the displaced couple journeying to Thule.

Half the strips in this volume also include the delightful "The Medieval Castle," Foster's chronicle of two young boys growing up during the time of the First Crusade – but by the end of the 1945 strips this series has ended and the Valiant portion resume its full-page glory.

This volume also features a Foreword by P. Craig Russell, a gallery of Hal Foster's commercial illustration work and an essay titled "Aleta: Water Nymph of the Misty Isles" by Brian M. Kane [author of The Definitive Prince Valiant Companion] .

With stunning art reproduced directly from pristine printer's proofs, Fantagraphics has introduced a new generation to Foster's masterpiece, while providing long-time fans with the ultimate, definitive version of the strip. 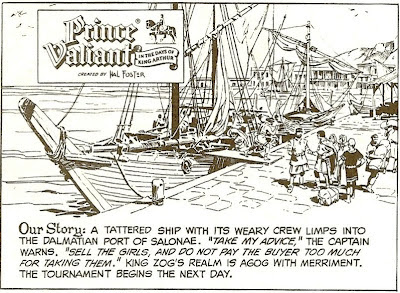 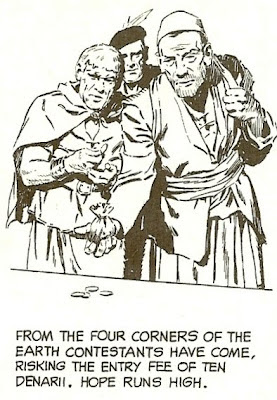 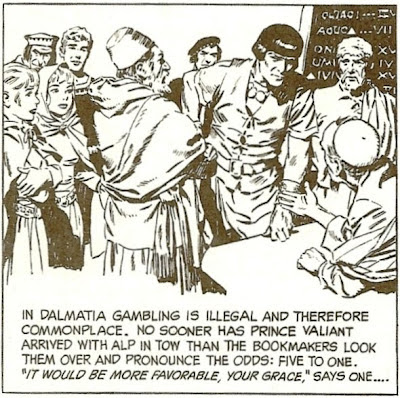 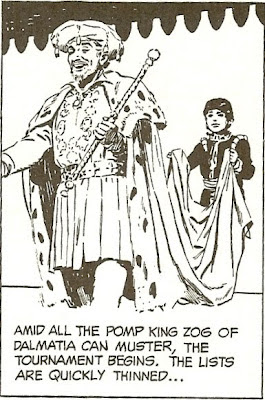 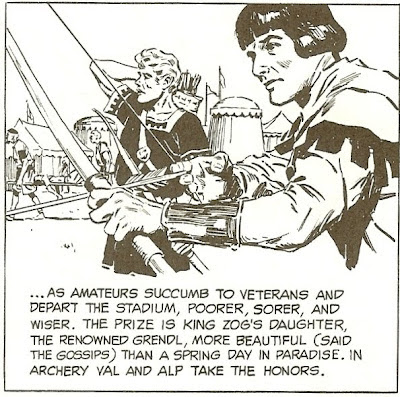 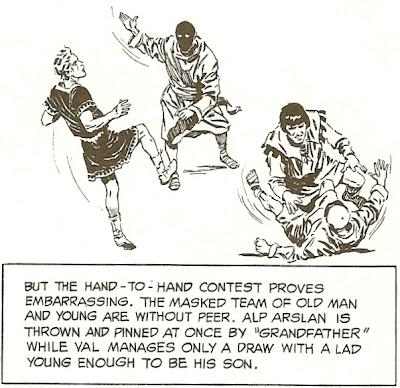 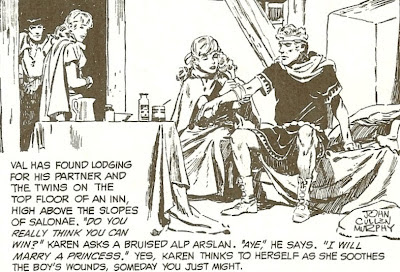