“Two of the Best Volumes Yet in the Series” 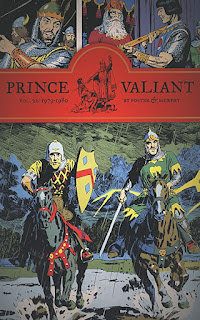 Following (with added links) is an excerpt from Tyler Tichelaar’s review of Prince Valiant, Volumes 22 and 23 (1979-1982), the two most recent releases by Fantagraphics Books.

Tyler is the author of The Children of Arthur series, which includes the novels Arthur’s Legacy, Melusine’s Gift, Ogier’s Prayer, Lilith’s Love, and Arthur’s Bosom. He has also written the non-fiction scholarly works King Arthur’s Children: A Study in Fiction and Tradition and The Gothic Wanderer: From Transgression to Redemption, plus numerous other novels and non-fiction works.

To learn more about Tyler and his writings, click here, here, and here. 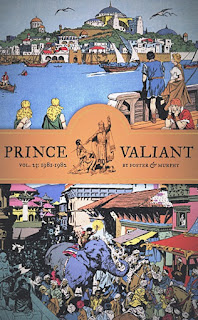 The Prince Valiant saga continues in the latest two volumes reproduced by Fantagraphics, and I must say these are two of the best volumes yet in the series. Ironically, Volume 22 contains the last of creator Hal Foster’s contributions to the strip. He had already quit doing the final artwork some years earlier, handing it over to John Cullen Murphy, but through 1979, he continued to create the scripts and concepts for the artwork, until at age eighty-seven, he fully retired. The writing was then taken over by John Cullen Murphy’s son Cullen Murphy. With all due respect to Foster – for we would have no Prince Valiant without him, and his incredible work marked the strip’s first forty-two years – I feel there is no falling off in artwork after he left, and the plots, as evidenced at least in the first three years completely in the Murphys’ hands, may well be even stronger than in Foster’s original work. Having your successor keep up the momentum and quality of your work is rare indeed, and countless examples can be provided of works that have retained popularity but still fell off in quality when the original creator was no longer involved. One example is L. Frank Baum’s magnificent Oz novels. The series has continued for thirty-plus volumes after his original fourteen novels, but while they continue to be written and be popular, none of his successors ever really achieved the quality and whimsy of his original novels, as readable and enjoyable as many of those sequels are.

Volume 22 of Prince Valiant continues with one of my favorite elements of the strip, watching Valiant’s children grow up. We see his oldest son, Arn, now a squire to Sir Gawain and setting off on his first quest. Valiant’s youngest and fourth child, Galan, becomes a page so he can learn the manners of the court. The twin girls [Karen and Valeta] get less attention in these volumes, but they are ever present. Among the highlights of this volume are Arn and Gawain’s journey to the Isle of Man to help protect it from Viking raiders. In another storyline, Valiant is captured by brigands and sold into slavery, causing Arn to travel as far as the Sahara to find him, with a dramatic rescue happening during a sandstorm. Perhaps best of all, Mordred moves into the forefront of the plots beginning in this volume. In Prince Valiant, Mordred is Arthur’s half-brother, not his son, but he is just as evil. He begins to poison King Arthur to try to take the throne for himself, but of course, his plot is discovered. After Arthur recovers, he banishes Mordred from court, declaring “May your children scorn you and your grandchildren call you Judas.” This is a significant moment in the storyline, although the reader will not realize it for some time. . . . Several other adventures occur in this volume that I will leave for readers to discover on their own.

. . . What I loved especially about Volume 23 was that often two plots were going on simultaneously, which made the pacing better. Frankly, in some of the earlier volumes the plotting got kind of boring.

Like all previous volumes, there are opening and closing essays. Volume 22 begins with an article by Cullen Murphy first published in The Atlantic in 1994. I loved reading it because I read it when it was first published in The Atlantic at the time I was beginning work on my book King Arthur’s Children. It was my first introduction to the Prince Valiant strip. . . . The final essay in Volume 23 discusses historicity in the Prince Valiant strip, which is interesting because it points out both the depth of research Foster and the Murphys did to make the setting appropriate to the days of King Arthur and where they introduced anachronisms. For example, by providing a timeline of Valiant’s life, he would have to be ninety-nine years old to live long enough to meet the Emperor Justinian. Oh well, the storylines are fun if we don’t try to impose too much historical accuracy on them.

Volume 23 has an essay on art [by artist George Pratt], including the role of nature in the strip. It includes mention of other strips that were influenced by Foster, including mention that he was himself influenced by Howard Pyle. The concluding essay is really a collection of the drawings/scripts Foster created to work from.

Overall, I would say these volumes created a real resurgence of interest in the Prince Valiant strip for me. . . . I eagerly await Volume 24, to be released in December 2021.

To read Tyler Tichelaar’s review in its entirety (though be warned, there are numerous plot spoilers!), click here.