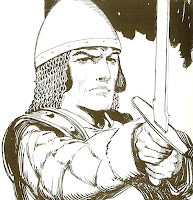 In marking this impressive achievement, King Features, the publisher of Prince Valiant in more than 300 American newspapers, notes that the strip created by "the immortal Hal Foster" and first published on February 13, 1937, "continues strong to this day as the pinnacle of comic strip adventure storytelling."

It's a view shared by many, including Matt Seneca who, in his recent review of Prince Valiant, Volume 4: 1943-1944, writes, "Prince Valiant . . . has probably done more time than any other [strip] as the popular imagination’s pick for 'greatest comic ever.' . . . [T]he mastery Foster brings to bear on his every panel may have been equaled both before and since his prime, but it’s never been surpassed." 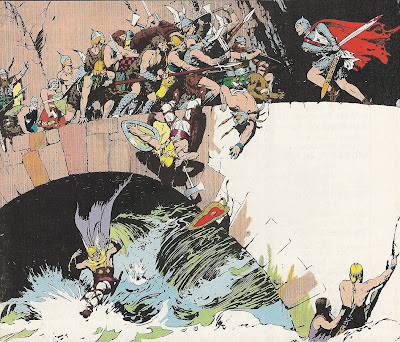 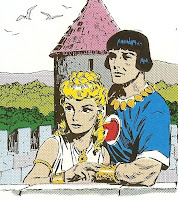 Of course, two artists who have in their own unique ways equaled the artistry of Hal Foster are John Cullen Murphy and Gary Gianni. It has been to these two that the mantle of 'artist of Prince Valiant' has been passed. Murphy was Foster's handpicked successor and drew the strip from 1971 to 2004.

Right: Prince Valiant and his wife Aleta, Queen of the Misty Isles, as drawn by John Cullen Murphy in 1978. 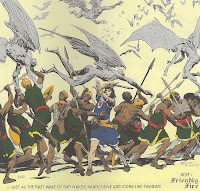 Gary Gianni, in turn, was Murphy's choice of successor and has drawn the strip since 2004 up to the present day.

Left: Prince Valiant and his companions are attacked by harpies in this memorable 2007 illustration by Gary Gianni.

Others involved over the years in the creative endeavor that is Prince Valiant include writers Cullen Murphy and Mark Schultz, colorists Mairead Murphy and Scott Roberts, and, briefly in the early 1970s, artists Gary Morrow and Wally Wood. 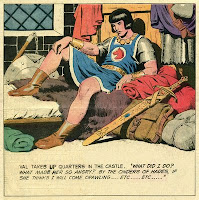 Right: The Prince of Thule as drawn by Wally Wood. For more rare images of Wood's "try-out" time on Prince Valiant in the early '70s, see this post on Thomas Haller Buchanan's excellent The Pictorial Arts blog.

Generally regarded by comics historians as one of the most impressive visual creations ever syndicated, Prince Valiant is noted for its realistically rendered panoramas and intelligent, sometimes humorous, narrative. Instead of word balloons, Prince Valiant is narrated via captions positioned at the bottom or sides of panels. Frank Plowright in The Comic Guide (1997) notes that: "In the strictest sense, Prince Valiant isn't a comic, being illustrations accompanied by blocks of text, but it's nevertheless stylish, influential, and an exceptional body of work." In his introduction to the first edition of The Definitive Prince Valiant Companion (1992), Todd H. Goldberg suggests that Prince Valiant be considered "a massive illustrated novel presented in a comic art-like style."

Above: The July 31, 2011 installment of Prince Valiant,
with artwork by Gary Gianni and text by Mark Schultz. 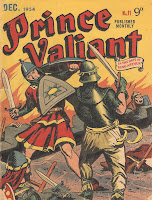 Left: The cover of one of the Prince Valiant comic books my father, Gordon Bayly, collected as a teenager in the 1950s. It was these comic books, published and distributed by Associated Newspaper Ltd of Sydney, Australia, that first introduced me to Prince Valiant. They were comprised of black-and-white compilations of Prince Valiant installments from the late-1930s to the mid-1940s.

To mark the 75th anniversary of Prince Valiant an art exhibit featuring Hal Foster’s work on both Prince Valiant and his earlier strip Tarzan, will be on display throughout February at Tinley Park Library (7851 Timber Drive, Tinley Park, Illinois). The exhibition is curated by comics enthusiast Sid Weiskirch, and will travel to different libraries throughout Illinois, including Blue Island Library in July and August 2012, and Orland Park Library in January 2013. 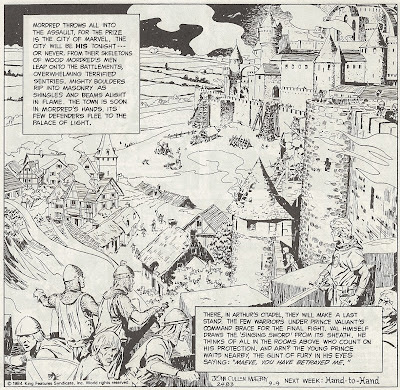 Above: The fall of Camelot: A panel from the September 9, 1984 installment
of Prince Valiant, with artwork by John Cullen Murphy and text by Cullen Murphy.

Twenty-five years ago, when I was a college student in Australia, I wrote an article celebrating the 50th anniversary of Prince Valiant which was published in the Canberra Times.

Last year on the 74th anniversary of the strip I started this blog, A Prince Named Valiant.

And it is at this blog today that I celebrate the 75th anniversary of Prince Valiant by sharing the following pages and illustrations. As you'll see, they all reference various milestones in the strip's history. Be sure to click on each image for a more detailed view. 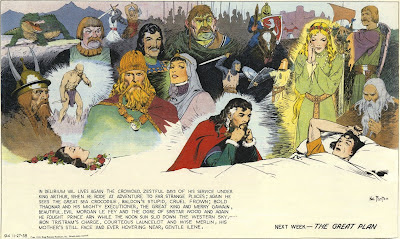 Above: A memorable panel from the early days of the strip – November 27, 1938, to be exact. The scene of a young Prince Valiant in the grip of a life-threatening fever provides Hal Foster a powerful and poignant opportunity to revisit the significant characters and events of the strip's first two years.

Keeping vigil by Prince Valiant's side is his father, King Aguar of Thule, while "ever hovering near" is the specter of his first (and lost) love, Ilene. 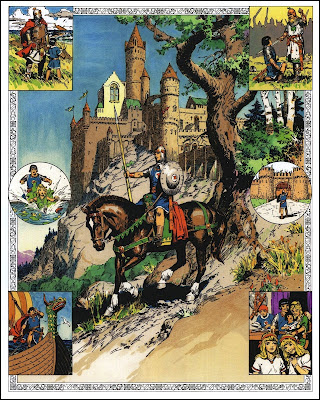 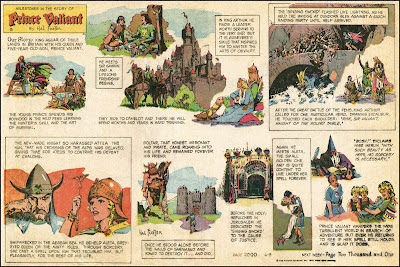 About this page Thomas Haller Buchanan writes: "Published well after [Hal] Foster retired and laden with iconic Foster artwork from the past, [this page] was quite a treat to see in the midst of John Cullen Murphy's run on the strip." 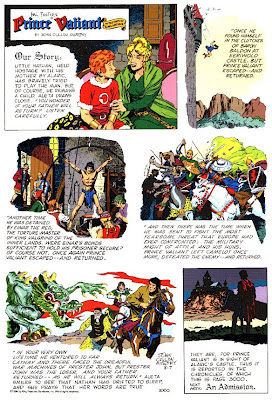 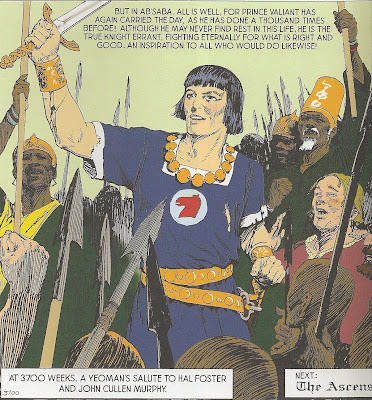 NEXT: Something Very Special . . .
See also the previous posts:
• Welcome!
• A Valiant First Effort, Wouldn't You Say?
• "He Wasn't a Superhero But He Was a Hero"
• Mark Schultz on the Art of Hal Foster: "Uniquely Appealing, Innovative and Influential"
• John Cullen Murphy on Prince Valiant: "It's My Duty. I'm Responsible For It"
• Mark Schultz on Prince Valiant as an American Invention
• "We Are the Daughters of the Queen of the Misty Isles and the Prince of Thule"
• Man of Action
• Looking Good