With these words Karen and Valeta, the twin daughters of Prince Valiant and Queen Aleta, returned August 7, 2011, to the Sunday adventure strip that bears their father's name.

Their words are spoken to Maldubh, whose dark witchcraft threatens both Val and Aleta's lives, and is ultimately aimed at placing her conniving husband, Draco, on the throne of Camelot.

Yet with the help of their sister-in-law Maeve, Karen and Valeta wage a spectral battle against Maldubh – a battle that they ultimately win.


Left: A dazed and enraged Maldubh demands to know the identity of the three mysterious interlopers who have defeated her dark witchcraft.

I'm not sure, but I think this is the first time since artist Gary Gianni and writer Mark Schultz began collaborating on Prince Valiant in November 2004 that Karen and Valeta have made an appearance. I don't think this absence has anything to do with Gianni and Schultz's dislike for these particular characters. Rather, I think it may have something to do with how they've chosen to depict Prince Valiant and Queen Aleta. 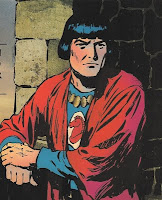 You see, over the 30+ years that Gianni's predecessor John Cullen Murphy drew Prince Valiant, he aged Val to a man in his mid-40s (left). Yet since fully taking over the strip in 2004, Gianni has taken a good twenty years off Valiant and Aleta. Indeed, as the illustration below demonstrates, at times Prince Valiant looks as young as his adult children! 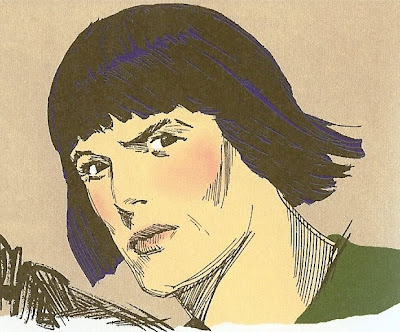 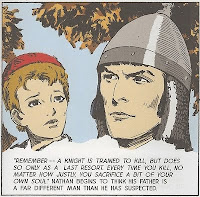 All the more reason, perhaps, to keep these adult children off center stage as much as possible. Of course, Nathan, the youngest in the family, doesn't look out of place (right). And Arn, the eldest, almost has to be present. He is, after all, married to Maeve, the niece of King Arthur, and currently serving as regent of Camelot. Furthermore, Arn and Maeve's daughter Ingrid is heir to the throne. With such connections, it's difficult to write Arn out of the story. Not so, it seems, Karen and Valeta, and their younger brother Galan.

Yet perhaps with the recent return of Karen and Valeta, we'll see more of the daughters of the Queen of the Misty Isles and the Prince of Thule!

Following are some depictions of Karen and Valeta throughout the 70+ year history of Prince Valiant. 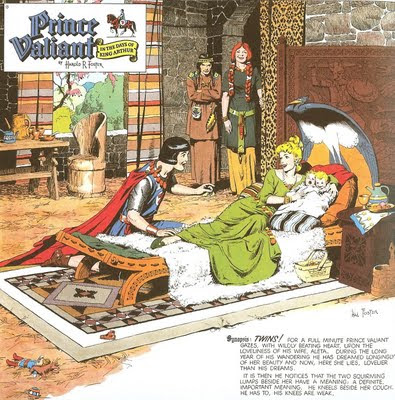 Above: After a year away adventuring, Prince Valiant returns home to find he is the father of twin daughters.

After Val and Aleta's twin girls were born, King Features held a contest to name them, but Foster reserved the right to select the winning entry. A young girl, Cindy Lou Hermann, sent in the winning names "Karen" and "Valeta" and visited Hal in Connecticut. 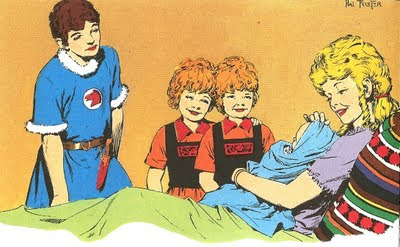 Above: Prince Valiant and Queen Aleta's growing family. From left: Arn, Karen and Valeta, and Aleta with the infant Galan. 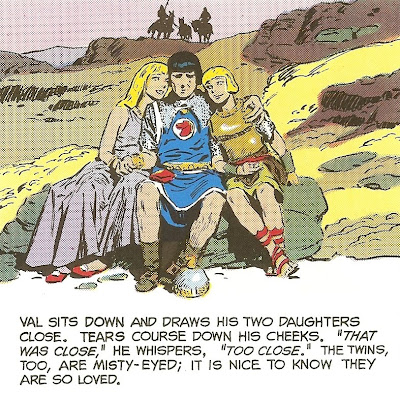 Above: In the aftermath of a dramatic rescue, Prince Valiant shares a tender moment with his daughters.

Karen (at right) is sporting the attire of the Amazons. Her interest in the legendary nation of female warriors in Greek mythology was inspired by her witnessing of the defeat of the Persian warlord Khazan II by Hypathia, Queen of Petropolis. 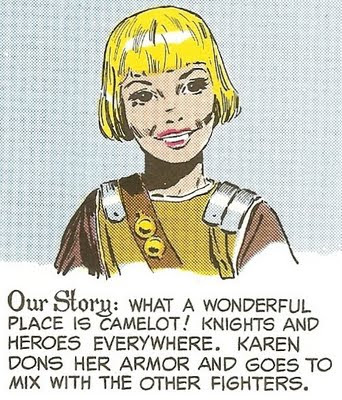 Above and below: Two panels from installment #2162 (July 16, 1978) highlighting the difference in interests and personalities of Karen and Valeta. 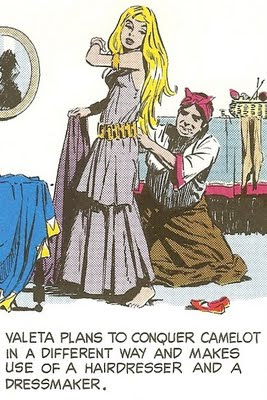 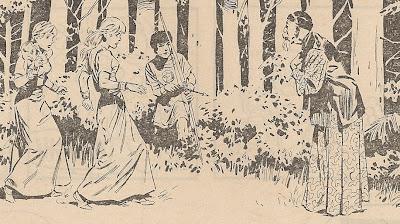 Above: The teenage Karen and Valeta, along with their brother Galan, make the acquaintance of Chinese scholar Yuan Chen. 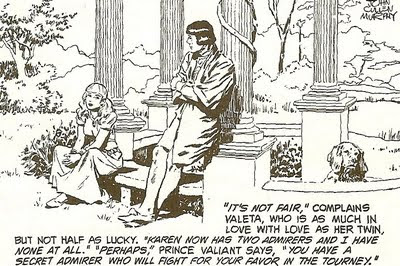 Above: Prince Valiant attempts to console a lovelorn Valeta. By entering the tourney incognito as "Lord Trueheart" and asking Valeta for the honor of wearing her pennon, it's Val who will be his daughter's "secret admirer."

Valeta, meanwhile, becomes romantically involved with the young Druid high priest Cormac, who is described as a "strange mixture of warmth, wisdom, wit, and sadness." In time it is discovered that Cormac is Maeve's long-lost brother, and thus, like her, the son of King Arthur's evil half-brother Mordred. It's a revelation that causes much grief and trouble for the young man.

Although there is no mention of Karen and Vanni in Gianni and Schultz's "seasonal greeting" installment of 2010, it is noted that Valeta and Cormac are living amidst the "emerald vales" of Hibernia, while Galan "continues his scholarly pursuits" in Jerusalem.

UPDATE: The Return of Karen and Valeta
Posted by Michael J. Bayly at 10:33 PM