Mark Schultz on the Art of Hal Foster: "Uniquely Appealing, Innovative and Influential" 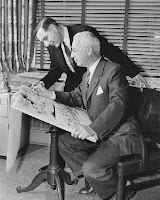 Mark Schultz, the creator of the Eiser and Harvey Award-winning comic book Xenozoic Tales (a.k.a. Cadillac and Dinosaurs), has been writing Prince Valiant, as illustrated by Gary Gianni, since 2004.

The following appreciation of the artistic legacy of Prince Valiant creator Hal Foster (pictured at right) is excerpted from the foreword Schultz wrote for Fantagraphics’ 2010 publication Prince Valiant (Vol. 2): 1939-1940.

Hal Foster’s enduring status as the most important figure in the development of adventure comic strips would be difficult to dispute: With Tarzan, his groundbreaking adaptation of Edgar Rice Burrough’s iconic ape man, and then Prince Valiant, his personal invention and masterpiece, Foster virtually single-handedly invented the visual language and set the storytelling standards that would dominate serial comic-strip adventure for decades. What is open to argument, however, is whether Foster was primarily a cartoonist, working with and exploiting the opportunities unique to the sequential medium – or more of a traditional illustrator squatting on the comics page while remaining largely aloof from comics conventions.

The distinction, of course, isn’t that simple. Foster was very conscious of the differences in the disciplines and venues for which they were intended, and he made choices. Which elements of illustration Foster brought to the comics page, which illustrative elements he incorporated from established color comics added up to a singular whole that made his work uniquely appealing, innovative and influential. 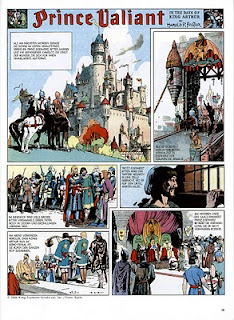 . . . [The] one . . . creative choice that Foster made that most clearly separates him from the greater body of cartoonists [was to present] his strips’ text in the form of open captions, with narration and dialogue intermixed. He dispensed with one of the strips cartoonists’ unique tools, the word balloon. A singular stylistic choice, it’s impossible to imagine Prince Valiant otherwise, so completely is this uncommon feature integrated into the formal look of the strip. I have no idea whether or not the decision owes any allegiance on Foster’s part to book illustration, but the conceit does work well to consolidate textual information and organize the panels, with their big dollops of visual information, into easily read designs. Word balloons would have made Valiant a different experience, read in a very different rhythm. . . . 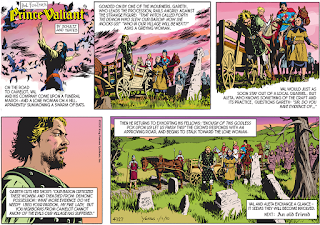