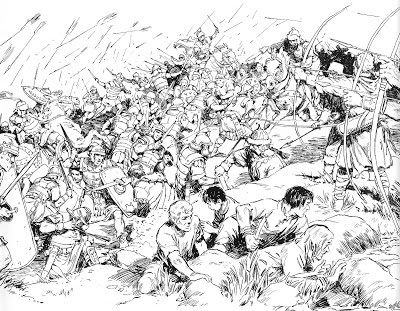 Above: Panel three of installment #3401 (April 14, 2002) is an impressive example of artists John Cullen Murphy and Gary Gianni working together on Prince Valiant. The foreground figures of (from left) Arn, Galan, Prince Valiant and Sir Gawain are drawn by Murphy, while the detailed battle scene behind them is by Gianni.

In his 2008 book The Prince Valiant Page, Gianni writes the following about his collaboration with Murphy.

This arrangement wasn't permanent . . . and when the venerable master retired, he made it quite clear he no longer wanted anything to do with the strip. As of March 28, 2004 I was on my own.

"Don't send your finished pages to me," he directed. "Send them directly to King Features. I won't need to see them anymore."

"Wouldn't you care to draw a page occasionally, just to keep your hand in it?" I asked. The artist's response seemed all too brief, given the years he's invested in the enterprise.

At that time, I did not know how ill he was.