Valiant to the Rescue 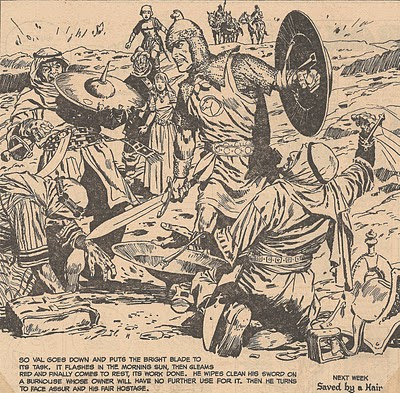 Above: A panel from the November 13, 1977 installment of Prince Valiant.

While in Beirut with their family, Karen and Valeta, the twin teenage daughters of Prince Valiant and Queen Aleta, are kidnapped by Assur, "son of a Sheik from beyond the Jordan." Prince Valiant, armed with the "bright blade" of the Singing Sword, quickly pursues and rescues them.

At first glance, this illustration could be misconstrued to imply that the various artists and writers involved over the years in the creation of Prince Valiant have been careless and insensitive in their portrayal of people from non-European cultures. Yet to think this would be a serious mistake. In the preceding adventure, for example, Prince Valiant's allies and friends were Sheik Abdul El Mohammed and members of his family and household, while the protagonist was a hot-headed and arrogant Teutonic knight named Gunther (pictured below). 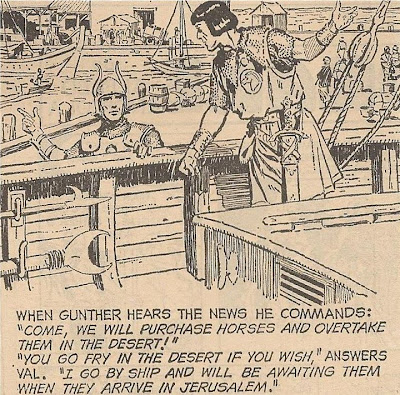 Furthermore, as Frank Plowright notes in The Slings and Arrows Comic Guide (1997), from its earliest days, "the plots [of Prince Valiant were] . . . never condescending towards other nations in the manner typical at which they were created." 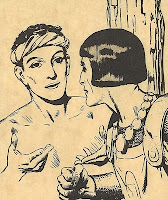 One of the earliest examples of this can be observed in the Hal Foster created character of Ramud of Tunis (pictured at right, from the August 5, 1945 installment). Brave and resourceful, Ramud is a vital ally in the rescuing of Valiant's future wife Aleta from the tyrant Donardo.

This respectful and even-handed portrayal of people from diverse cultures is a characteristic of Prince Valiant that continues to this day. 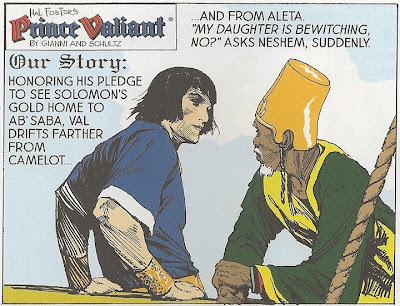