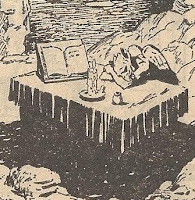 In his "quest for humility," Prince Valiant is led to an old hermit who dwells in a deep chasm in the Swiss Alps. Here, the old man explains, lie all of humanity's follies and sorrows.

In one underground cavern, Prince Valiant is shown hundreds of scribes, busy at work recording the good intentions of everyone in the world.

But what of that one sleeping scribe?

"Poor Dagobert," the old man sighs. "His job is to record the good intentions people actually fulfill. He has not much to do." 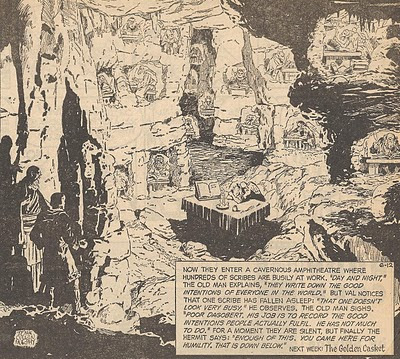 NOTE: For some theological musings on this particular illustration, see my Wild Reed post, Waking Dagobert.