With his plans thwarted and his wife's sorcery defeated, Draco, the would-be ruler of Camelot, is confronted by Prince Valiant. 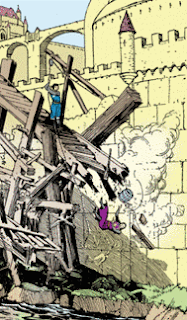 Ironically, his wife Maldubh's "spell" on the scaffolding around the walls of Camelot (mischief that involved an infestation of wood burrowing beetles!) ensures Draco's demise.