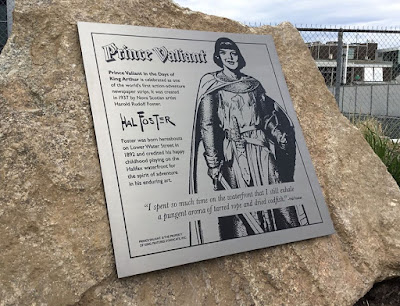 Earlier this week, a stainless steel plaque commemorating Hal Foster and his creation Prince Valiant was installed by Emera Corporation in Foster’s hometown of Halifax, NS. Emera owns an electrical utility, Nova Scotia Power, a company with roots back to the same Lower Water Street site.

When Foster was a boy, the neighbours to the north of his grandfather Stevens’ house were the many horses of the tramway company, which were retired in favour of a new-fangled machine called an electrical generator. Now, over a century later, the trams and most of the old neighbourhood are long gone, but there is still electrical equipment working at the site, surrounded by the large concrete firewall visible in the accompanying photos. In light of how many horses he later drew for Prince Valiant, it is interesting that Foster was familiar with the sights, sounds and smells of a large horse barn from the time of his birth.

The effort to have a commemoration for Foster installed at this site began nearly two decades ago, with the publication of Dr. Brian M. Kane’s book, titled Hal Foster, Prince of Illustrators, Father of the Adventure Strip, and it is a pleasure to share the news of the installation here today. 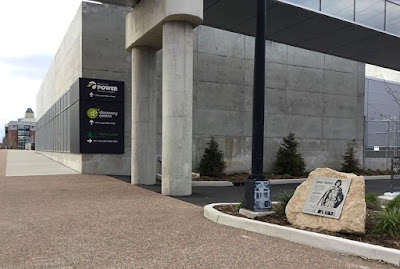 See also the previous posts:
• How It All Began
• Mark Schultz on Prince Valiant as an American Invention
• "He Wasn't a Superhero But He Was a Hero"
• Celebrating 83 Years of Prince Valiant
Posted by Michael J. Bayly at 7:00 AM