Ahead of His Time 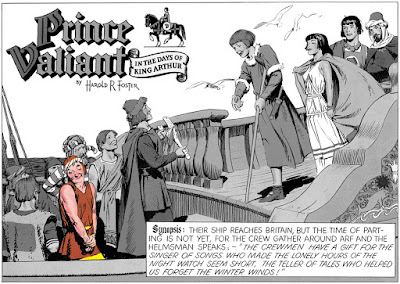 Prince Valiant creator Hal Foster was ahead of his time, tackling issues of bullying (the Giant in 1940), women’s rights (Aleta since the 1940s), bi-racial couples and children (Boltar, Tillicum and Hatha – 1952 and 1953), men showing their emotions (1940 Val, Gawain and Tristram parting – “and the tears run freely down bronzed cheeks . . . for in those days brave men had not learned to be ashamed of their emotions.”), and prejudice against the physically disabled, Jews, Arabs, and Blacks.

Because Foster never drew something without a reason, it makes me wonder if a character in Prince Valiant, page #757, August 12, 1951, panel 1, striking a traditionally feminine pose, might be gay. The crew’s reaction is to Arf, “the singer of songs who made the lonely hours of the night watch seem short.” I am not suggesting anything happened between the two, but the crew member’s reaction to Arf’s leaving needs some discussion.

The pose was not uncommon; it appeared in silent films, and is similar to that of Bugs Bunny in drag playing the Valkyrie Brünnhilde in the Chuck Jones classic “What’s Opera, Doc?” (Warner Bros., July 6, 1957 – almost six years after the Foster panel appeared). Any thoughts?

Email ThisBlogThis!Share to TwitterShare to FacebookShare to Pinterest
Labels: Brian Kane, Hal Foster
Newer Posts Older Posts Home
Subscribe to: Posts (Atom)
WELCOME!
For an introduction to Prince Valiant and this blog, click here.
For the latest Prince Valiant page,
click on the image below.