How It All Began

This past weekend saw the publication of the wonderful installment of Prince Valiant by Gary Gianni and Mark Shultz that celebrates the 75th anniversary of the renowned adventure strip. Today, February 13, is the actual anniversary, and to mark the occasion here at A Prince Named Valiant I share the page or installment that began it all. Yes, it's Hal Foster's very first Prince Valiant page, originally published Saturday, February 13, 1937. It's followed by an official statement released earlier today by King Features, the publishers of Prince Valiant. Enjoy! 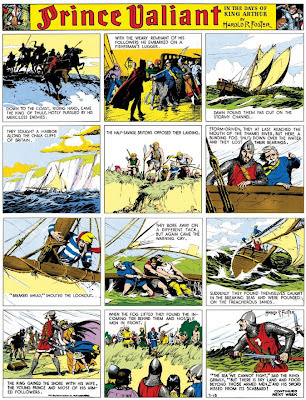 Click on the image above for a larger view. 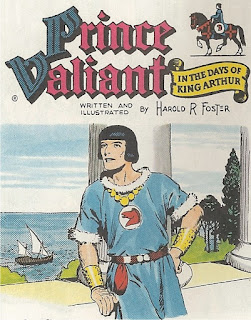 NEW YORK, Feb. 13, 2012 – Horrit the Witch foretold that he would have a life of adventure, but never contentment. True to the prophecy, Prince Valiant has never rested in striving for the Arthurian ideals of chivalry: defeating evil, defending those who do right, and through feats of courageous derring-do, seeking truth and justice for the common good. Today, those 5th century quests may seem at times as alien and unattainable as the Holy Grail, but they live on to inspire all who read them each and every week in the Prince Valiant comic strip, which marks its 75th anniversary today.

From the moment its first page appeared on Saturday, Feb. 13, 1937, Prince Valiant has been continuously published, offering its readers an epic series of unforgettable adventures, an exquisite panoply of artistic creation, a fascinating look at history, and a lasting tribute to Arthurian legend, one of the most consistent folk and literary traditions of Western civilization. 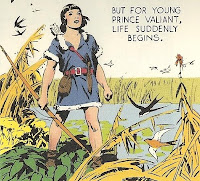 In the very first story arc, readers met the young prince, still a mere boy, and his parents, rulers of the Scandinavian kingdom of Thule, as they fled from the evil Sligon, who had usurped the throne. The family found sanctuary in the fens of King Arthur’s British realm.

During that first year of the strip’s syndication, Valiant grew to manhood, met Sir Gawain, Sir Lancelot and King Arthur and performed a host of knightly deeds such as slaying dragons and rescuing fair maidens. In 1938, he acquired his famous Singing Sword, the blade twin to Arthur’s own Excalibur and, after being knighted by King Arthur in 1939, he was able to ensure his father’s restoration as king of Thule the following year. 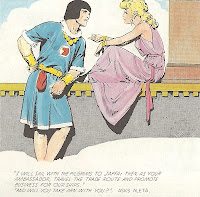 One of the intriguing aspects of the Prince Valiant story is its domestic dramas. In 1946, Val married the fair Aleta, Queen of the Misty Isles. When Aleta was kidnapped and taken out to sea, Valiant’s dogged pursuit took him all across the Atlantic before he finally caught up with her in the Americas. The couple’s first son, Arn, was born in America in 1947. Val and Aleta would eventually have four more children: Karen and Valeta, twins, were born in 1951; Galan, in 1962, and Nathan, in 1982. Val became a grandfather when Arn and his wife, Maeve, had their first child in 1987. And so the saga has continued . . . 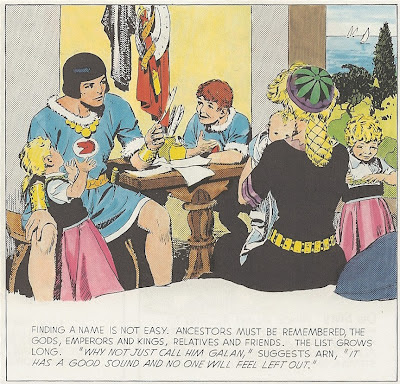 Above: Prince Valiant and Queen Aleta's growing family. Art and text by Hal Foster
(from the April 16, 1961 installment of Prince Valiant). 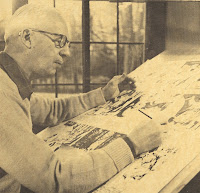 Hal Foster [left], who had authored the popular Tarzan comic strip, was invited to create his new strip at the suggestion of newspaper magnate William Randolph Hearst, whose King Features Syndicate has distributed the strip from the start. Prince Valiant became a legend during Foster’s own lifetime. The National Cartoonists Society gave Foster its highest honor, the Reuben Award for Outstanding Cartoonist of the Year, in 1957. 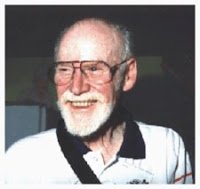 The Sunday-only page has continued to earn kudos from readers and professional peers alike under the lengthy and able stewardship of Foster’s successors. While Foster continued to write the strip, his hand-picked assistant, John Cullen Murphy [right], assumed the artistic mantle for the strip in 1970. Murphy surmounted the huge challenge of following in Foster’s footsteps and, when his son and editor of The Atlantic, Cullen Murphy, began to pen the scripts in 1979, the father-and-son team successfully guided the venerable comic strip to new successes during their tenure. John Cullen Murphy received the National Cartoonists Society’s Best Story Comic Strip Award an unprecedented six times for Prince Valiant. 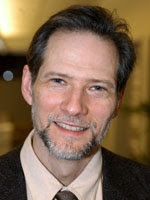 John Cullen Murphy passed the mantle to renowned comic book illustrator Gary Gianni [left]. Murphy had carefully chosen and worked for two years with him before Gianni took over full responsibilities for the strip in 2004. Cullen Murphy continued to write the strip until later that same year, when another comic book great, Mark Schultz, took over.

20th Century Fox made Prince Valiant into a feature film, starring Robert Wagner in the title role, in 1954. In 1991, an animated version, The Legend of Prince Valiant, became a regular feature on The Family Channel. In 1997, a second live-action version was released in Great Britain. 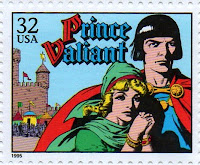 Beginning in the 1930s, Prince Valiant has been the subject of many comic books and anthologies published through the years all around the world. Today, the Prince Valiant strip continues to inspire a great deal of interest in the publishing industry and currently several new reprint series are available worldwide. In addition to issuing an ongoing series of hardcover anthologies, Bocola Verlag in Germany has published for the serious collector Prince Valiant: The Camelot Edition, a numbered, slip-cased folio edition. Limited to 700 copies (the first 300 are in German, and the remaining copies in English) the editions are packaged with an original, historical newspaper broadsheet comics page. In Spain, Planeta DeAgostini is publishing a multi-volume series of the complete Foster opus. Other collections are being published in Austria, Switzerland, Canada, the Benelux, Russia, Eastern Europe and Uruguay. 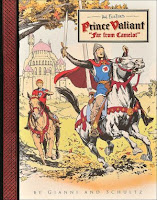