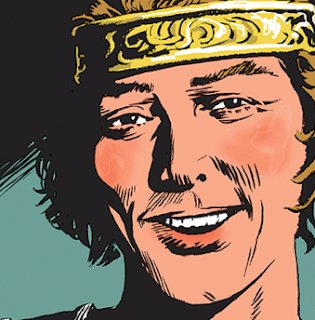 Last week’s page saw the welcome return of Arn and his family to the Prince Valiant saga.

Prince Arn is the first-born of Prince Valiant of Thule and Queen Aleta of the Misty Isles. In his youth, Arn was smitten by Maeve, a woman of great mystery. In time it was revealed that Maeve was King Arthur’s niece, the daughter of his evil half-brother Mordred.

After many trials and tribulations, Arn and Maeve eventually married. They have a young daughter named Ingrid, whom Arthur decreed the heir to his throne.

When Arthur retired to a life of solitude and seclusion, he made his niece and her spouse the co-regents of his realm until Ingrid comes of age.

Page #4363 (September 20, 2020) of Prince Valiant shows Arn for the first time in a long time. It's been just as long since Maeve has made an appearance, and even longer for little Ingrid.

Of the five children of Val and Aleta, the three who have figured most prominently in the strip over the past decade are the youngest, Nathan, and the twins, Karen and Valeta. The one who has been seen the least is Galan, who for years has been studying medicine in far-off Jerusalem. 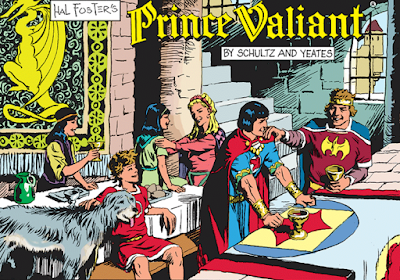 At long last [back in Britain], Val, Aleta and Nathan report their travels in the southern and eastern worlds to Camelot's regents, Arn and Maeve, and to Ingrid – the heir to Arthur's throne. As they are all family, separated for years, there is much exchange, and gossip well outside the bounds of official court business.

See also the previous posts:
• Reunion
• A Sweet Reunion
• “We Are the Daughters of the Queen of the Misty Isles and the Prince of Thule”
• The Return of Karen and Valeta
• Marital Woes
• A Valiant First Effort, Wouldn't You Say? 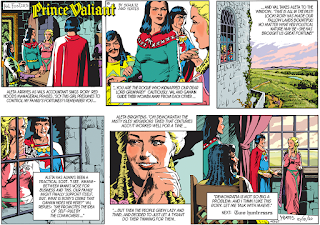