Thomas Yeates: "My Biggest Thrill is Seeing the Prince Valiant Logo on My Drawings" 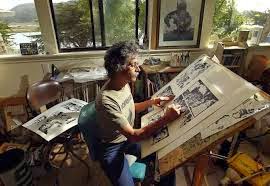 Prince Valiant illustrator Thomas Yeates was the subject of an October 31, 2014 Press Democrat article by Stephen D. Gross. Following with added images and links is an excerpt.

Prince Valiant came into [Tom Yeates'] life in 2011 at the ComicCon convention in San Diego, when a King Features representative approached Yeates about taking over the venerable comic strip. Its previous illustrator, Gary Gianni, had been hired to do illustrations for Game of Thrones. The first strip illustrated by Yeates appeared April 1, 2012.

“I was speechless” said Yeates. “It was like a dream come true.”

Prince Valiant is the longest continuous comic strip story in print, created by Hal Foster in 1937 and still appearing in more than 300 papers, including The Press Democrat. [NOTE: Actually, Prince Valiant is not the "longest continuous comic strip story in print." Dick Tracy (1931), The Phantom (1936), and, arguably, Gasoline Alley (1918) have been in print since their debuts without resorting to reprints.] It stars the distinctive prince and his kin, who are immersed in medieval Arthurian battles with sea serpents, shipwrecks, specters and sirens. And Yeates and his readers would have it no other way.

Valiant endures, he said, because of the ongoing action-packed story line and because the strip is visually well done and carefully crafted. To keep it fresh, Yeates keeps a watchful eye on movies and other people’s work.

Since 2004, the story line is written by Mark Schultz, who sends Yeates three or four stories at a time. He spends at least three days illustrating each strip with the high quality, complicated drawings in the strip’s characteristic style.

As Yeates juggles Valiant with all the other art projects in his airy studio overlooking the Russian River estuary, music is a constant companion. It follows him into his private life as a singer/songwriter.

Yeates performs locally with his band, the Jennerators, but nothing beats the national notoriety that comes from following in Foster’s footsteps.

“My biggest thrill,” said Yeates, “is seeing the Prince Valiant logo on my drawings.”