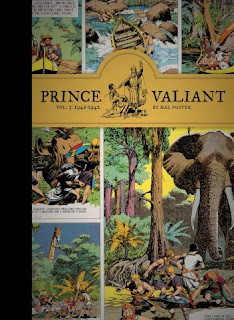 Following is a review of Prince Valiant, Volume 3 (1941-1942), which was released by Fantagraphics Books on March 21, 2011. This review was written and first published by The Comics Reporter.


_____________________
In his fine introduction to this new Prince Valiant collection, Dan Nadel briefly invokes Jack Kirby as a cartoonist who picked up on the way of making comics by which Hal Foster became a star, methods practiced by only a handful of others. According to fellow practitioner Burne Hogarth, Foster employed classical ways of drawing and made them work at a size and with an elegance of line that the images retained their power but also kept the eye skipping across the page. Kirby/Foster is an enlightening if offbeat comparison; in addition to the similarities in figure and panel work that Nadel describes, the power each could suggest within a single image, both cartoonists used page design and narrative rhythm to control their work's tone, to cut into what otherwise might be an interminable journey from point A to point B.

In devouring the latest in Fantagraphics' fine, modern-day collections before the introduction, I was actually reminded more of Kirby's fellow Silver Age comic book titan Steve Ditko. Foster's young man seethes and overreacts and even plays the fool in the same way that Ditko allowed Peter Parker the human foibles inherent to those in the process of becoming an adult. (Spider-Man never got mad enough to lop off anyone's hand that I can remember, so point to Valiant there; they did operate in different centuries with their own definition of "responsibility," however.) As long as the readers are invested in the energy with which Valiant seizes after goals both major and minor, we remain intrigued by his story. My memory of Prince Valiant as it progressed in later years makes me wonder if Foster ever got all the way past the bold and obvious appeal of this specific version of his character, to the point that future, similar adventures felt like a retreat for Valiant as opposed to continued growth, explaining also why the story would be shifted to Valiant's son.

There was a time not many decades ago when Hal Foster was considered the greatest cartoonist in the world, end of story, by a significant subset of people that took comics seriously -- my father among them. Like my father, many of the people who thought this have now passed on. This latest collection effort allows those younger than, say, 60 years old, to take a second look at the work without hackles raised, minus the powerful impulse to push back and tear down a conception born of a restrictive view of what art does well and why. With fresh eyes, savvier readers will likely recognize the obvious appeal of the bigger, splashier images but also pick up on the impressive hammer-to-nail effect that Foster could summon from a nine-panel grid. Most readers will see or at least sense the essential economy with which Foster tells his stories, how the more complex imagery serves a specific thematic function either by making unshakably lucid some sensual aspect in play or by drawing a moment that encompasses several smaller instances in a way that stops the eye and makes it consider an effect greater than the sum of those parts. Even untethered from rigidities caused by favoring realistic rendering over all other expressions available to the the form, it's hard not to be come away impressed by Foster's prodigious skill set.

Foster staged individual scenes extremely well. He never wasted a closeup, and he also knew where each man in a group of men might stand in proximity to a threat according to their personality as individuals and as a group. Foster could show a realization moving across the faces of dozens and in what order they came to enlightenment, and he could put a grin on Valiant's face that said everything it needed to about his role in the action to come. Seeing all this work under one cover makes one realize how much Foster accomplished in the context of a delivery system that for most people meant work that slipped from view and memory seconds after being consumed, only to have to muster its entire energy the next time around. Nadel mentions that Foster may have doubted his own greatness, but each time I see and attempt to catalog the various techniques he put into play every time he worked on a page, I come away with enough faith in his ability for the both of us.