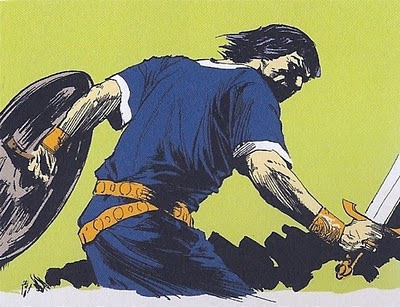 Gary Gianni is the third and current illustrator in the 74-year history of Prince Valiant. He took over full time from his predecessor John Cullen Murphy in 2004, the two having first began collaborating in 2001.

In 2008 Gianni wrote and compiled The Prince Valiant Page, an indispensable resource in which he explains "the mechanics of going about illustrating Prince Valiant" via "thoughts jotted down during the production sequences, descriptions of materials and techniques, [and] a word about models and other reference sources." It also includes a richly illustrated look at Gianni's work leading up to Prince Valiant. In short, it's a wonderful resource, full of great illustrations and insightful observations about the creative process. Following (with added links and images) is an excerpt. 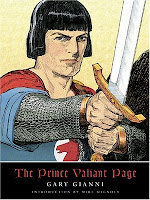 . . . As with many kids, my early interest in drawing (and reading) rests largely with a fascination of comic books. Even before learning to read, I was enthralled by the comics of artists such as Jack Kirby. His visuals enabled me to follow a story line simply by studying the drawings.

Despite my admiration, there's little evidence of my own work being influenced by the masters of the comic field. The high-octave graphics of talents like Kirby seem to be missing altogether. The desire, however, to tell stories through pictures and render the liveliest figures imaginable stem from the art of these remarkable men.

But what is the difference between an illustrator and a comic book artist anyway? Or, for that matter, a cartoonist? The issue is dangerously nuanced and the similarities outnumber the differences. In an interview in the 1970's, [Prince Valiant creator] Hal Foster sidesteps the question neatly.

"I can't cartoon. I am an illustrator. But where the cartoonist ends and the illustrator begins is pretty hard to say." 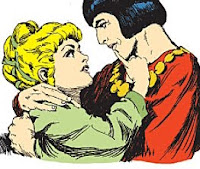 As Hal Foster conceived it, the Prince Valiant comic strip is a narrative with illustrations accompanying the text. He rarely took advantage of the storytelling techniques found in comic strips. The snub-nosed style of Chester Gould or the cinematic approach of Milt Caniff or Will Eisner would be incongruous on Prince Valiant's stage. Indeed, Prince Valiant is more opera than film. A lyrical Victorian fragrance underlies the historical realism. Foster and [his successor John Cullen] Murphy were concerned with the careful rendering of the detailed tableaus. Groupings of figures are integrated within stately environments . . . For these reasons some critics will argue Prince Valiant is not a true comic strip.

But what of that?

When commenting on the differences between jazz, rock and classical music, composer musician "P.D.Q. Bach" observed, "All musical forms are created equal." Invoking Duke Ellington, he added, "It don't mean a thing, if it ain't got that swing and if it sounds good it is good." 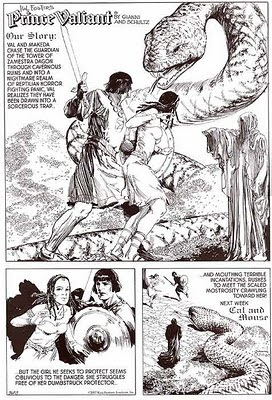