Over at Collected Comics Library, Wallace Ryan has selected Prince Valiant (Volume 7): 1949-1950 (Fantagraphics Books) as his pick for "must have" comic book collected edition, reprint, and/or graphic novel released this week. Following is Ryan's review. 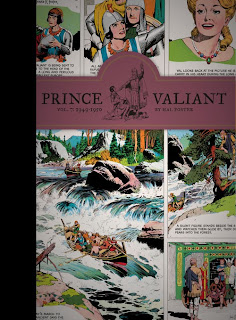 The new comics arrived today and buried deep in one of the last boxes was the latest volume in Fantagraphic’s collection of Hal Foster’s graphic masterpiece, Prince Valiant! I’d only ever seen pictures over the years of Foster’s magnum opus and had always wanted to get my hands on some kind of collection of these Sunday comics. Thankfully, Fantagraphics Books has obliged with this wonderful set of hardcovers with colour reproduced from original syndicate proof sheets restoring the vibrant and rich colours that previous reprints of the strip seem to have lacked.

Prince Valiant is a classic adventure comic that follows the exploits of the Nordic Prince, who becomes a Knight of Arthur’s court and roams the medieval world with the singing sword Flamberge by his side, fighting evil and injustice in all its forms. The artwork is beautifully detailed and it’s obvious that Foster dedicated a lot of time on research and in the comic’s final execution. The storytelling is paced with expertise and care, giving a feeling like you’re sitting at the knee of the great Prince as he regales you with wild tales of his travels and his many adventures.

I recommend that you give Prince Valiant a try and you will experience legends from the edge of time, still wrapped in the magic of Camelot and a world wide open for exploration, danger, romance and tragedy. In terms of the classic adventure comic strips of old, you’re not going to get anything much better than this timeless gem!